ALBION ONLINE KICKS OFF FINAL BETA, PLUS HIGHLIGHTS FROM THE AMA

Posted on October 17, 2016 by albiononlinebook

Albion Online’s final beta phase kicks off today, with a reported $7 million under its belt in crowdfunds. Over the weekend, the team ran an AMA on Reddit to answer player questions. The highlights:

Albion will indeed launch B2P as a single-server, global game. This last leg of beta will be closed and not open; devs say that an open beta would be unfair to backers, that they don’t need free testers (“we have more than enough players”), and that they “believe [B2P] does not work together well with an open beta.” (Players contested this and pointed out open betas in MMOs are used to determine whether the game is worth purchasing.)
Planned improvements down the line include “faction warfare, expeditions, fishing, transportation contracts, improved UI, arena, better PvE content.” The devs wrote, “With our existing feature backlog, we could happily continue improving the game for at least 12 months before we’d run out of ideas.”
Non-instanced housing is in the game, and the devs say they are hoping for more customization options in the future. Player shops are not planned because “the local marketplaces fully fill that role.” 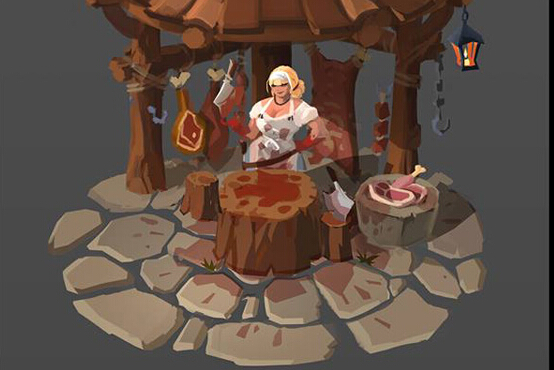 The team working on the game is now around 40 people.
Multiple questions about P2W went unaddressed, but as one Redditor pointed out, SI has already written about P2W at length.
Why mobile? Sandbox wanted to combine its focus on gameplay over graphics with the inexpensive addition of new players through cross-platform play. The new PC UI is meant to patch mobile’s deficiencies on PC.
“Our main inspiration for Albion Online was our frustration with the MMORPG genre and our love for open world, sandbox games with relevant PvP and a fully player driven economy,” say the devs.
Finally, here’s the run-down on PvP and ganking:
“It depends on how “criminal” you are. If you keep your crime somewhat in check, you can still access the red cities on the royal island, and do your crafting and trading there. Once you get nefarious or dreaded, you will need to be based out of the lawless continents. These also have player cities, which you are free to use. Of course, they are far more dangerous. Our goal is two support both playstyles:

the “measured” criminal, who picks his victims carefully to avoid getting thrown out of the red zone cities
the “dreaded” criminal, who tries to cause as much havoc as possible. They will have a super hard time in the royal continents as a result of that – but it’s possible. Expect to be hunted down by anti player killers a lot, though.”

This entry was posted in Albion Online Help. Bookmark the permalink.